Never in my life as a development chef have I been so fascinated, inspired yet frustrated by an ingredient which has more applications in food production and preparation than any other I have ever known. Yes I’m talking about seaweed which is for sure a wonderfully diverse natural ingredient we will be seeing lots more of in the future on our plates! During two days of development I was joined by fellow chefs Tom Lawson from Rafters & Luke French from Joro both amazing restaurants in Sheffield along with Anthony Flinn from Darkside Consultancy. We had before us an array of products – dried, dehydrated, powdered and the star of the show –  fresh kelp from the only organic, biodynamic kelp farm in Europe – Islander Kelp run by Kate Burns in Northern Ireland.

So what do you do with kelp? Good question one that has tested my skills and creativity as development chef to the max. You may have heard of dulse – a leafy sea lettuce which grows in abundance and is usually dried and added to breads even butter. Equally you may have sprinkled an alternative salt substitute made from seaweed or had a powdered form in a smoothie or health drink without even realising. Stocks, sauces and food manufacturers are all now looking at different types of kelp as readily available natural product to add flavour to their products, even better it contains no allergens so ideal for “free from” ranges in main stream retail.

Chefs are now embracing the versatility of kelp in it’s different forms, although it’s never going to appear on all menus but those chefs who understand and want to embrace this vegetable from the sea they are certainly in for a treat. Unlike green leafy vegetables kelp holds it’s form shape and colour when cooked without going limp and soggy. We experimented with dashi, stocks, tagliatelle, soups even bhajis – there wasn’t anything this sea vegetable couldn’t do! The blanched seaweed we worked with came from not too far afield – Rathlin – a tiny island off the North coast of Northern Ireland looking back towards the Unesco site of  National Trust’s Giant’s Causeway on the mainland. Rathlin has only 140 inhabitants one shop, a youth hostel, one newly refurbished B&B known as the Manor House and a tiny art gallery run by a local artist. Other than an amazing RSPB bird reserve with more puffins, razorbills, kittiwakes and guillemots than you can ever imagine there is little else but the amazing nature, rare plants,native wildlife and of course the kelp farm. I was lucky enough to visit with to see exactly how this natural beauty is grown.

Kate has been involved in rural and marine development for many years, running her own consultancy from 2007 to 2013. During this time she prepared coastal community plans for all of the Rep. Of Ireland for the Irish seafood Board. She now runs the kelp farm with the help of her sons who were raised on the island. The kelp spores are released in to conditioning tanks in the lab just off the harbour at the centre of village life. As they grow the spores attach on to spools and given the correct conditions to grow they will soon be ready to be carefully transported to the ropes in the sea. As the young plants develop in the rough, clear waters they grown glossy fronds up to 2-3 metres long. Because the kelp grows downwards from the ropes it remains flat and uniform without any thick stalks as it would grown in the normal way. After a few months the kelp is ready to be harvested by hand from a boat and nothing more than the addition of a couple of strong people who don’t mind getting wet! A good days harvest can produce around a ton of raw kelp which is then packed in single use bags to keep it fresh and clean until it is processed.

I am still overwhelmed with the endless uses for this naturally amazing product and know there will be many more sessions to come trialling it’s uses. Islander Kelp has been featured in the last few months on Saturday Morning Kitchen & Country File along with being shortlisted by the BBC Food & Farming Awards which will be announced on 20th September 2017 in Bristol. 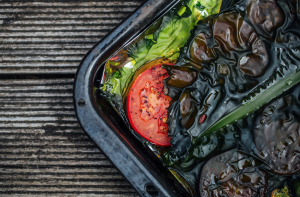 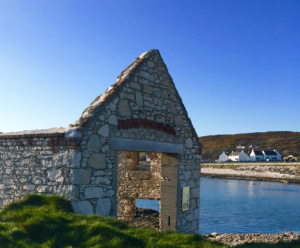 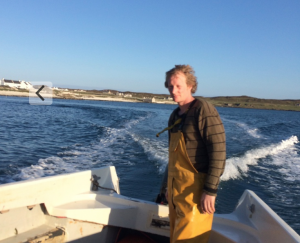 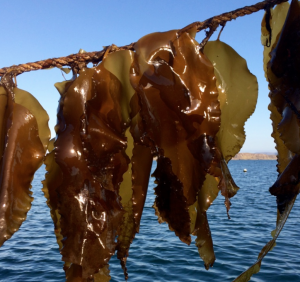 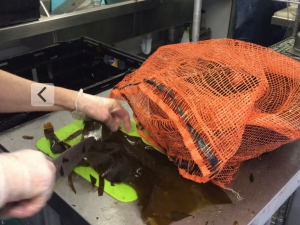